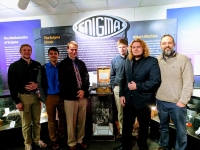 Two professors and five students from Taylor University's Computer Science and Engineering department traveled to Washington, D.C. this week to present their work in malware research to Lockheed Martin Advanced Technology Labs (ATL). The work was sponsored by ATL and carried out by three professors and 14 computer science students during 2017. All five students in attendance took part in the presentation and were paid complements by the project sponsor.

Although the work was advanced, students from all grade levels participated in the project. They used tools such as IDA Pro, OllyDbg, and Wireshark to reverse-engineer and analyze the behavior of malware. Malware, it turns out, is an interesting enough subject to motivate students to learn difficult computer science topics.

When students were asked what they found to be the most valuable part of the work, they answered:

“An intimate knowledge of common vulnerabilities and how to avoid them.”

“The open-ended nature of the work was a great experience.”

“Learning how to use tools such as IDA Pro, OllyDbg, and getting more familiar with Windows x86 assembly.”

“I learned how to use GitLab effectively and I became more comfortable with Git in general.”

“A more solid understanding of x86 assembly—I can actually write it now, instead of just read.”

After the presentation, the group visited the National Cryptologic Museum. The museum is operated by the National Security Agency and has on display artifacts and information about the history of cryptography.

The team was able to encrypt and decrypt secret messages using an Enigma machine. A machine that was used by axis powers to communicate securely during World War II. The Enigma machine’s encrypted communication was famously intercepted and decrypted by the allied forces as depicted in the popular 2014 film The Imitation Game about the life of Alan Turing.