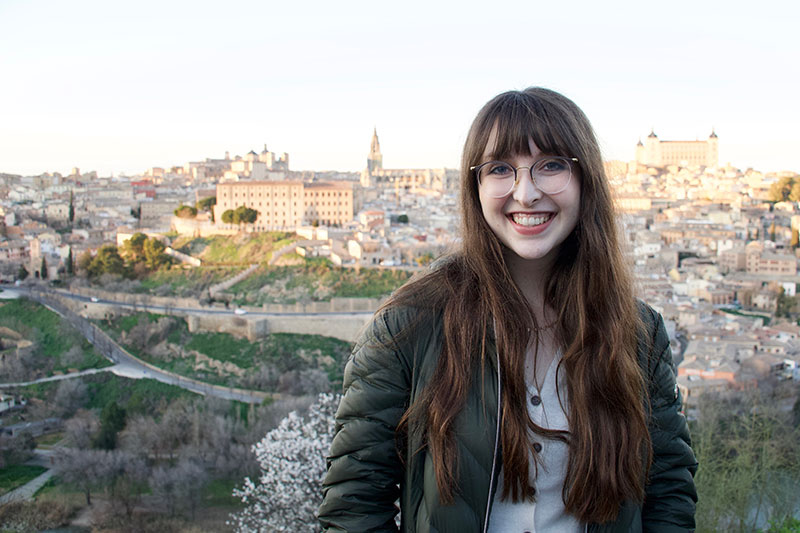 When the coronavirus began to spread across the globe, Taylor University called back students studying abroad for the semester in consideration of their safety and health. In light of the global pandemic, the news is understandably flooded with stories highlighting the worst, but one testimony stood out from the abundance of bad news.

Taylor sophomore Bailey Miles was in the Chicago O’Hare airport returning home early from her semester in Spain when an Associated Press (AP) news reporter approached her and asked her to comment on her experience at the airport.

In a news story centered on the anxiety of the situation - a crowded airport packed with stressed-out travelers - Miles stands as the sole bright spot in the AP news article.

“The employees were really helpful, had positive attitudes and had a lot of grace,” Miles said. She even mentioned to the reporter that a woman was passing out snacks to those in line. Her hopeful perspective was the result of an intentional choice to find the good in a hard situation.

As a Spanish major and Political Science minor, Miles was looking forward to a semester in Sevilla, Spain. She described the city as incredibly beautiful with an atmosphere layered with culture and history.

A few of her highlights were the Mediterranean food, sunny weather, and most importantly, the people who welcomed her with open arms. Despite the fact she was only able to spend two months in Spain, she says she feels like she has another family there.

Although her trip was cut short, Miles is not letting the virus define her trip. Rather, she remembers her time in Sevilla as conversations with her host mom, walks with friends along the Guadalquivir River, weekend trips around the country, and much more.

“I won’t allow my disappointment that my time was cut short to overshadow the goodness of everything else,” Miles said.

Miles remembers hearing about the emerging virus shortly after she arrived in Spain in January. However, in the busyness of adjusting to life in a different country, her concerns faded and the coronavirus seemed like a distant rumor.

The first time the virus directly affected Miles was as she was planning her spring break travels. Along with some friends, she was anticipating a trip to Rome and Naples when the virus reached Italy. Little by little, her conversations became saturated with talk of the virus, especially as cases were popping up nearer and nearer to her.

Miles describes Tuesday, March 10 as a normal day with one anomaly: a message from the program director announcing a mandatory meeting for the following day. She did not expect to hear that the program would be shutting down immediately, especially after a routine day attending classes, eating with her host mom, and celebrating a rare homework-free night.

Miles says the students were shocked when they were given the news they were to return home as soon as possible. She felt like the relationships she was developing with friends and her host mom and her education in a culture she came to love were suddenly taken away.

“I was beyond disappointed, incredibly sad, and a little bit angry,” Miles said.

She said her goodbyes to her professors, classmates, and Sevilla in a whirlwind farewell tour, but it did not feel real to her that she was leaving until her tearful goodbye with her host mom.

She took one last glance at the apartment she had called home for the last two months and then headed to the airport.

Miles described the airport scene as strained and busy as people prepared to travel home. Her flight was completely full, and once she landed in Chicago, she was guided to customs and a health screening. After hearing from a friend who traveled home a day before that the wait was hours long, Miles expected the worst. She was pleasantly surprised when she got through the line in an hour.

When the AP reporter approached her, rather than focusing on her disappointment returning home or the anxious environment, Miles chose to spotlight the airport employees and their grace towards the anxious travelers.

To Those Hoping to Study Abroad

“Even though my time studying abroad ended abruptly, it was an extremely impactful experience that I would wholeheartedly recommend to anyone who is able to do it,” Miles said. “There is no better way to cultivate humility, adaptability, compassion, or independence than by leaving everything familiar behind and immersing yourself completely in foreignness. It will force you to evaluate your own culture and beliefs in new ways, and you will come back with a wealth of new perspectives.”