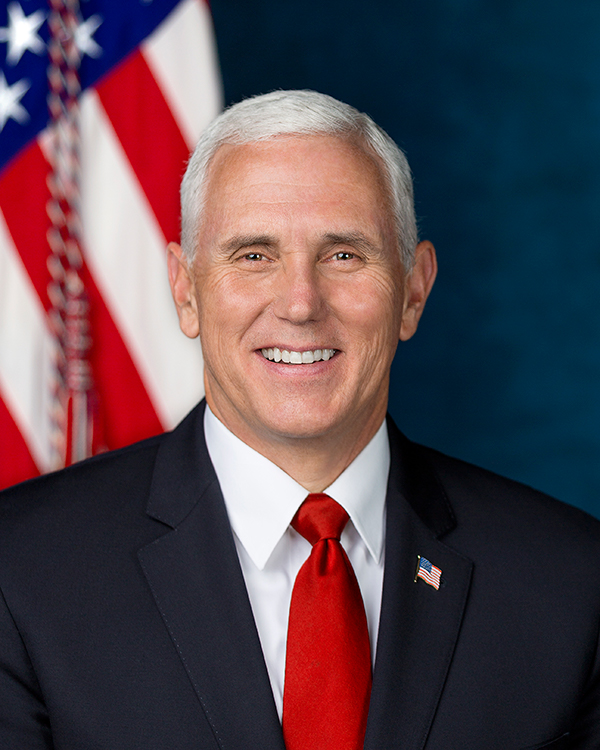 Upland, Indiana – Vice President Michael R. Pence will be the featured commencement speaker at Taylor University on Saturday, May 18, 2019, at 10:00 am, in the Kesler Student Activities Center.

Pence, the 48th and current Vice President of the United States, previously served as Governor of the State of Indiana and was elected to Congress six times by the voters of East Central Indiana.

As Governor of Indiana, Pence increased school funding, expanded school choice, and created the first state-funded Pre-K plan in Indiana history. He made career and technical education a priority in every high school and invested more than $800 million in new money for roads and bridges across the state. Despite the record tax cuts and new investments in roads and schools, the state remained fiscally responsible, as then-Governor Pence worked with members of the Indiana General Assembly to pass two balanced budgets that left the state with strong reserves and AAA credit ratings.

Pence was chosen by President Donald Trump as his running mate during the 2016 election. After winning the presidency and vice presidency on November 8, 2016, Trump and Pence entered office on January 20, 2017.

He is a graduate of Hanover College and the Indiana University School of Law. Pence practiced law, led the Indiana Policy Review Foundation, and hosted The Mike Pence Show, a syndicated talk radio show and a weekly television public affairs program in Indiana.

“Taylor University is pleased and honored to welcome to our campus and its 2019 Commencement exercises, Vice President Mike Pence,” said Taylor’s President, Dr. Paul Lowell Haines. “Mr. Pence has been a good friend to the University over many years, and is a Christian brother whose life and values have exemplified what we strive to instill in our graduates. We welcome the Vice President and his wife, Karen Pence, to this 173-year-old premier institution of Christian higher education, and thank them for their love and service for our nation, our state, and our institution.”

Due to the anticipated larger-than-usual graduating class and expected crowd, Taylor officials say tickets will be required for admission to the Kesler Center, which will be distributed to members of Taylor’s Class of 2019 and their families.

About Taylor University: Founded in 1846, Taylor University is a premier, nondenominational, Christian liberal arts university and the number one college in the Midwest Region as determined by U.S. News and World Report’s survey of best American colleges. Located in Upland, Indiana, Taylor has achieved this ranking 11 of the past 12 years, and been ranked in the region’s top three for 22 consecutive years. Taylor has also received high regional and national rankings from Open Doors, a survey associated with the U.S. Department of State that measures study-abroad programs, as well as Forbes and Princeton Review. With more than 60 fields of major studies, Taylor University’s alumni number more than 25,000, and serve in occupations ranging from medicine and computer programing to education and law.

Taylor University is a member of the Council for Christian Colleges and Universities (CCCU).

Respond To This Story