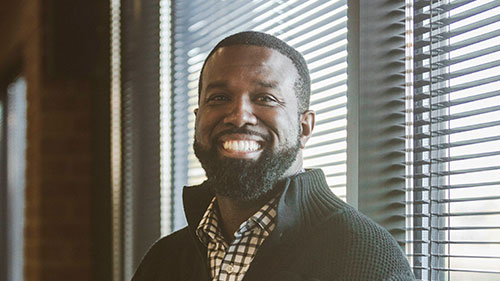 At Taylor University, education means more than just teaching. It means having a positive impact on kids, whether through excellent teaching or administrative work.

Alan Jones (’02), principal at Fort Wayne Community Schools and Taylor alumnus, has a fiery passion for the impact education has on kids, and it all started at Taylor University.

Jones entered the Education department as a junior at Taylor. With a heart set on teaching and coaching, Jones navigated two busy years as an Education major, balancing not only his academic work, but also athletic training as a basketball player. Both of these fields influenced Alan’s future plans. He looked forward to teaching, coaching basketball, and working with kids any way he could. “I’ve always had a passion and love for kids. I’ve always gravitated toward them, and they’ve gravitated toward me,” he said.

However, after Jones graduated from Taylor, God further honed his passions and goals into a purpose. “I wanted to have a bigger impact on students more holistically. I wanted to be more involved in a way I could touch more kids’ [lives] by working with teachers and influencing them.” This new idea led him to administration, where he has been ever since.

Even today, as Jones works as principal of a public school, God plays a big role in his day-to-day life. He does his best to implement his Christian beliefs into everything he does. He prays with his staff before meetings and does his best to be a Christ-like influence on those around him. His main motivation for this? The kids.

“They’re exposed to so many things they aren’t even ready for. Mentally, they can’t handle it. We need to show them another way because there is another way. We need to be that beacon for them. Some of them are just lost at sea. We need to continue to be that light.”

Driving this point home, Jones recounts how he recently visited one of his students at the hospital. It was a humbling experience, and he explained that experiences like it are constant reminders of how much kids need good, God-fearing people in their lives who will stand by them.

“Our kids come with so much trauma. So much stuff … They need to see the light at the end of the tunnel. We need to show them it’s there. We do that by being God-like. Not perfect.”

He mentioned how important it is to show kids you’re human, just like them. He added, “You’re not a robot. Smile. They want to see that.”

Pointing back to Taylor, Jones says, “I’m quick to say Taylor changed the directory of my life. Coming in from where I grew up and leaving with a renewed sense of truth and purpose has been huge for me.”

Jones has come a long way since choosing to pursue education, and he looks forward to continuing his journey with God by his side.